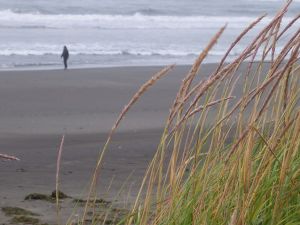 All month I’ve been struggling with my latest writing project, a YA novel entitled Washed Up On Barnacle Beach. Then yesterday, bathed in Solstice energy, at last I discovered its ON button: in this case the delete button.

I awoke knowing, as if by magic, what it was that had been holding the story back. The point of view was all over the map. I needed to keep it firmly with my protagonist, 15 year-old Sylvie Bee. So I started deleting everything that wandered away from her – over 10,000 words of what I had at one time thought was pretty cool writing. And today, leaner and with clearer direction, Sylvie takes command of her story and marches ahead into the adventure of her life.

Letting go of something I’ve slaved over, agonized over, rewritten until my fingers bled and my laptop battery was deader than disco stands out as one of the hardest things I’ve had to learn as a writer. It seems like a step back to round-file so much work. A defeat. An admission of failure. Yet looking at it from the flip side, I’ve tinkered with so many false starts and dead end ideas this month I now have a better notion what snarled paths to avoid the rest of the journey. I’m confident now that Sylvie and I will continue to trudge ahead until we are both happy with the ending.  And what the heck, maybe the stuff I deleted from this novel has a place in the next one. It’s all still there on the flash drive.