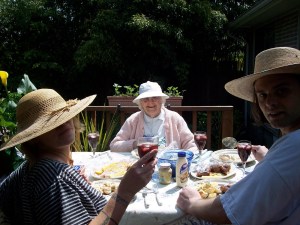 A few weeks ago Mike, a young friend of mine, nearly died. His health had been steadily declining for years, mystifying his doctors. Yes, he has type 1 diabetis but his blood sugar was well under control. So why was he losing so much weight; why was he dangerously anemic? In desperation his doctor ran diagnostics on his upper digestive track and there it was – Mike has celiac disease! Hurray!!

I say “hurray” because of all the things that could have been killing him, that’s one of the easiest to correct. I know first hand because my mother and I both have celiac. (Celiac is an auto-immune disease – usually hereditary – in which the body reacts in some rather nasty ways to gluten proteins. Gluten is found in wheat, rye and barley.) The only “treatment” is to completely avoid gluten – FOREVER. There is no “ease into it” option, no room for cheating, no safe amount of gluten. The bad news is that if you have celiac and you continue to eat gluten you die. Not a dramatic, drop-to-the-floor kind of death you might experience if you had a peanut or wheat allergy (celiac isn’t an allergy) but a lingering painful, messy sort of death. We won’t go into the grusome details. The good news is if you decided to commit suicide you could do it with a pizza followed by strawberry shortcake.

I know what Mike is going through right now. I’ve been gluten-free for over fifteen years (Mom, who is 95 years old, has been gluten-free for over thirty). Mike has learned he has a potentially fatal illness. He is in deer-in-the-headlights mode, just beginning to realize how radically his life has changed. Never again can he mindlessly grab a burger at the local MickeyD’s or pig out on crispy fried chicken. For the rest of his life he’ll need to carefully study product labels – gluten sneaks into a staggering number of products under mysterious names like “modified food starch”. Lucky for Mike the last few years have brought an explosion of gluten-free products to the grocery shelves! Used to be you had to go to expensive “health food” stores to buy GF (gluten-free) options for baked goods – and the goods all tasted like ceiling tile! Or you could do the baking yourself using one of a tiny hand-full of GF cookbooks (“Gluten-Free Gourmet” by Bette Hagman was the first one I ever saw – and I still use it. Check Amazon.com for GF cookbooks today and you’ll find zillions of titles.) Now, GF foods of every description pack the shelves and freezers of local supermarkets. It’s become trendy and cool to be GF. People who don’t even have the slightest intolerance have gone gluten-free to clean up their poor dietary habits and maybe lose a little weight along the way.

This is a great time to be gluten-free. Seems like every week I find a terrific new GF product – last year’s fabulous finds were Annie’s GF Macaroni-n-Cheese and Tinkyada brown rice spaghetti. I was so ecstatic to find pasta that didn’t cook down to a mushy sludge, that can be mistaken for the “real thing”, that I bought a case of each and stored them in the garage for fear I wouldn’t find the brands when I next went to the store. I have a freezer full of Van’s gluten-free waffles I use for open-faced sandwiches. That’s the way it is when you go gluten-free; you more keenly appreciate simple things like a tuna melt sandwich or a plate of al dente spaghetti buried in red sauce. I recently spotted a pizza take-out joint that advertised gluten-free crust. YEAH! Way to go!

You become more mindful of everything you eat when what you eat can kill you. That’s a GOOD thing (to quote Martha). Personally, I think having to go gluten-free was the best thing that ever happened to me. Truly. I know how weird that sounds, to be glad to have a serious health issue – but before I went gluten-free I was always tired, sick, stressed, depressed, and generally miserable though I didn’t recognize it at the time. I thought everybody felt that way; I didn’t know what it felt like to be WELL! Because celiac prevents you from properly absorbing nutrients, sufferers are always malnourished. And let me tell you, that affects every system of the body not just the gut! It can screw up the chemicals in your brain and the function of major glands but until something totally shuts down and refuses to cooperate you often don’t even realize you’re sick. By that time . . . well, you get the idea. Fortunately it doesn’t take long to turn the scene around once you stop poisoning yourself. Purge your diet of gluten and within 24 to 48 hours you feel the difference. It’s quite amazing how fast the body begins to heal itself. (If you suspect you may have a problem with gluten give it up for a few days – if you feel better you may be on to something. Get checked out – they’ve recently developed a blood test for gluten intolerance. Really beats the invasive gut-scope that used to be the only way to diagnose the disease.) So how am I these days? Glad you asked; I’m fabulous! Rarely get colds or flu, have lots of energy, am happy and enjoy life – polar opposite from my glutenizing past.

My friend Mike has cleared his kitchen of nasty gluten/poison. The other day I made him a big bowl of GF mac-n-cheese and this weekend I’m going to his place for a massive GF-gluttony supper. He says he’s gained weight this week and is feeling pretty good. He’s on the mend! He’ll be adjusting to the new life-style for awhile but I have every confidence that a fabulous healthy life awaits. By the way, May is National Gluten-Free Month – have a plate of gluten-free fried rice and lift a glass of gluten-free beer!!

(Sidebar: We all know that the mind/body is a complex interlinked system – poison part and you poison the whole. I have long wondered how many people have been misdiagnosed with mental illnesses such as bi-polar, depression, autism, attention deficit etc who are actually gluten intolerant. Not to minimize the seriousness of those challenges but it would be interesting to see a study on how gluten intolerance effects mental function. Hmmm.)